Our Attitude to Cannabis

Cannabis has been an important part of society, as a medicinal herb, since the beginning of recorded history. Yet, over the last 100 years societies view about cannabis dramatically changed. Politics aside, how has society come to have three differing views? What truths do they share?. Historically, marijuana came to the United States through immigration some would have us believe. However, little research exists about marijuana pre 1920’s prohibitionist era. 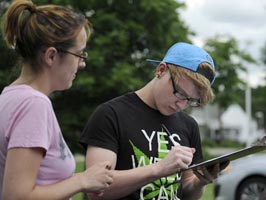 The opinions about marijuana vary from person to person; though opinions can generally be divided into three main groups. Some will consider marijuana a scourge on society, while others will recognize it’s medical value yet find it recreationally unacceptable, and the last group expresses the most liberal viewpoint, freedom and safe access.

When asked why someone may consider cannabis a scourge on society they often reply with a moral conviction and/or reference an experience with a person who consumed marijuana. They haven’t considered the possibility that it is the person who is to blame for their behavior and not the cannabis or it’s effects.

In the group which supports medical cannabis products but hesitant to support recreational use the common theme seems to be a belief that medicinal use for the most seriously ill patients is compassionate; hospice patients waiting to die. In those situations they see value yet they tend to question those will less visible illnesses believing they are using a condition as an excuse to become intoxicated or justify intoxication. Present day we see this group has played a vital role in vocalizing a desire for restrictions and oversight via doctors and their votes have a key role as well.

In the group which supports recreational freedom you will find two main points. First, those who believe in the natural right to cultivate God given resources in a “free” country. Second, you will find this group has a much more liberal view on recreational substances; often snubbing alcohol while praising cannabis. They seem to hold strong opinions about freedom and choice. In recent history, this group has attempted to come out of the shadows and bring cannabis to main-street America.

How are society and individual perceptions towards cannabis evolving? There will always be those who will oppose marijuana based on a moral belief about the affect is has on a person’s behavior. However, on the other end of the spectrum, there are those who are in favor based on beliefs in natural rights and nature’s medical uses.

Doctors, politicians, and businessmen all see it’s potential. The cannabis industry is not going away. We have two states with full recreational sale and a large number of medical states. Some citizens are even considered medical refugees because they have had to move in order to obtain cannabis medications such as Charlotte’s Web or Rick Simpson Oil.

Open4Cannabis will share stories and opinions, look at the legal and scientific theories, and provide unbiased information. We want you to form your own opinion. Drive responsibly, never drive impaired.