Taking an Open Stance on Cannabis

The majority of marijuana supporters land in this middle. They are believers in the medical potential because they have seen it; yet, they are not comfortable with recreational use.

This group’s mild mindset and logical view point tend to get respect from both sides of the issue. When navigating the political areas, such as local governing bodies, in states which have legalized in some way it is usually these middle thinkers who balance the tensions and keep people focused on the goal of providing patients, citizens, safe access to the products they need. 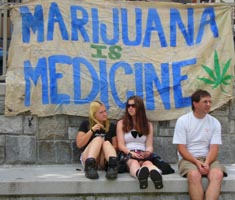 In this group, they want regulation to ensure safe medical marijuana is purchased through regulated and taxed dispensaries. While they may not believe in recreational use and may even believe some take advantage of medial laws; they agree relieving the suffering of those who are in great pain, dying from horribly painful illnesses is the humane thing to do.

There has been a significant shift in this groups’ thinking about cannabis.

Those with knowledge of Charlottes Web or Rick Simpson Oil are familiar with stories of miraculous relief and recovery through these products which are manufactured from the cannabis/marijuana plant.

Parents, who had never seen cannabis, have uprooted their homes and lives to move to states where they can get the medical cannabis products needed to treat serious illnesses. It is the parents in this group who have the most respect and knowledge. Parents who have children with certain disabilities found that after much frustration with pharmaceutical treatments cannabis treatments produced miraculous results. It is these stories which carry forward the movement to legalize cannabis and the research of cannabis for medical use.

In short this group wants to be safe. They see the potential, they see the evidence and the lies, and they are looking, searching, for some real truth. Looking at politicians fight for States rights while knowing the Federal government holds patents on cannabis they wonder how the hypocrisy got this out of hand.

In this group the key concern is getting real medicine to real patients yesterday. Those who believe in medical use are pushing the movement forward in hopes that when scientists across the country are allowed to research cannabis the cures for many illnesses have the potential of becoming a reality.

One of the biggest concerns in the conservative middle is people driving impaired. The fact that we have such a large number of alcohol related automobile fatalities in this country raises concerns. This safety concern has lead many people to want to see serious regulations and rules. Currently, a product is in the process of being manufactured which would be able to differentiate those driving impaired from those with metabolite residue.